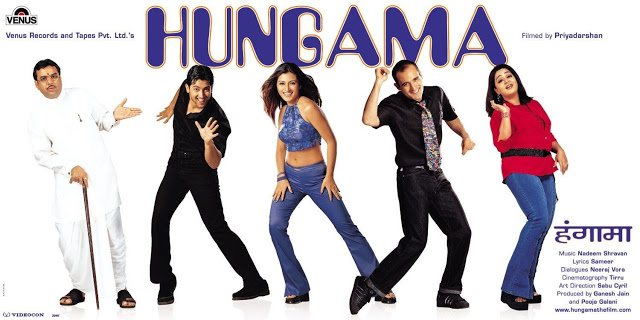 Hungama is directed by Priyadarshan and stars Akshaye Khanna, Aftab Shivdasani,Rimi Sen, Paresh Rawal, Shakthi Kapoor, Rajpal Yadav, and Shoma Anand. It an adaptation of the directors own Poochakkoru Mookkuthi. This hilarious film was released on August 1st, 2003. Why does it get a 10/10 in my view? Read my review to find out.

Story: This hilarious film is about a comedy of errors and mistaken identities. It's about 6 principal characters and the misunderstandings that happen between them.

Nandu (Aftab): He's this dopehead trying to make it big as a singer. His married landlady fancies her chances of eloping with him and he fancies his chances with Anjali, his roommate by fate.

Anjali (Rimi Sen): Hailing from the village, she's stuck with Nandu as a roommate and a job that she got by lying bare-faced. She's conned her boss Jitu into believing that she's the daughter of the business tycoon Radheshyam and wants to make a mark for herself out of the shadow of her dad.

Jitu (Akshaye Khanna): A rebellious son, he sets up his showroom by robbing his own house! When Anjali approaches him for the job, he's thrilled to have her, expecting to become the only son-in-law of the industrial mogul, Radheshyam.

Radheshyam (Paresh Rawal): This tycoon is but an old village coot. He finances everything from the village itself and he wants his wife Anjali to learn the ways of city mongrels. So they shift to their villa in the city to become part of the elite.

Anjali (Shoma Anand): A standard village wife learning how to run on the city treadmills, she's all furious because she thinks her hubby is having an affair with the city bird Anjali and that he's got illicit children. This she concludes from the constant bickering of Kachra bhai (Shakti Kapoor). She's also mad because her hubby seems to believe that she's having an affair with Jitu.

Kachra bhai (Shakti Kapoor): This guy believes that Radheshyam's son is engaged to his daughter. But in reality, the guy who engages his daughter was just a conman using Radheshyam's goodwill. How all these character's get into ridiculous situations and get out of them is what happens in this absolute laugh riot of a film.

Performances: Akshaye Khanna is good as Jitu and the man who wants to marry Anjali thinking she's Tiwari's daughter. His performance in the CD player scene is hilarious.

Aftab Shivdasani as Nandu is also good as the clueless city dweller who wants to be a singer. Rimi Sen is gorgeous and does decent in her debut.

It is Paresh Rawal that walks away with the honors. The star comedian gives an absolutely amazing performance as Radheshyam Tiwari. His dialogues and conversations with his wife will make you laugh so hard you'll be gasping for breath every time. He is simply amazing.

Shoma Anand is also hilarious as the wife who thinks her husband is having an affair and her scenes with Paresh Rawal are the highlight of this film. Shakthi Kapoor is also good in a role where he's looking for the man that conned him and his daughter.

Technicalities: Music is fine and BGM is okay. Dialogues are absolutely hilarious. Each situation in the film has the right dialogues. Cinematography is good. Art is fine. Screenplay is excellent and hilarious. Direction is fine. There really aren't any fights but the chase sequences are well done.

Analysis: In Telugu, we have films like Nuvvu Nakku Nachav, Malliswari, and Manmadhudu that make you laugh from start from finish and these are classics.

Hungama is no different in Hindi. The first time I saw this movie, I didn't really understand what was going on cause I don't understand Hindi but after re-watching it with subtitles, this movie made me laugh so hard my stomach was hurting. Hungama is a film that is so intelligently written you why we don't have more writer's like these in India and more indian films.

Right from the word go, this movie will make you laugh from start to finish. As soon as Paresh Rawal enters the fray, the real fun begins. The direction by Priyadarshan is excellent and his screenplay makes for a truly engaging watch. The only negative points of this movie are the songs in between because they take away the fun for a little bit and prolong the run time. Nevertheless, Hungama is a must watch for comedy film lovers and people who love entertaining films in general. Oh, and make sure you can catch your breath cause it will be hard to with you laughing your ass off the entire time.

On a whole, Hungama is a laugh riot and how hilarious this film really is can't be explained. It must be watched to realize it's hilarity in full extent. If you have watched it then you'll agree with me that it's extremely funny. If you haven't, then go and laugh for 2 and half hours that will be worth spending. I'm giving Hungama a perfect rating of 10 because this is arguably my favorite Hindi movie ever made and this movie is just too funny.