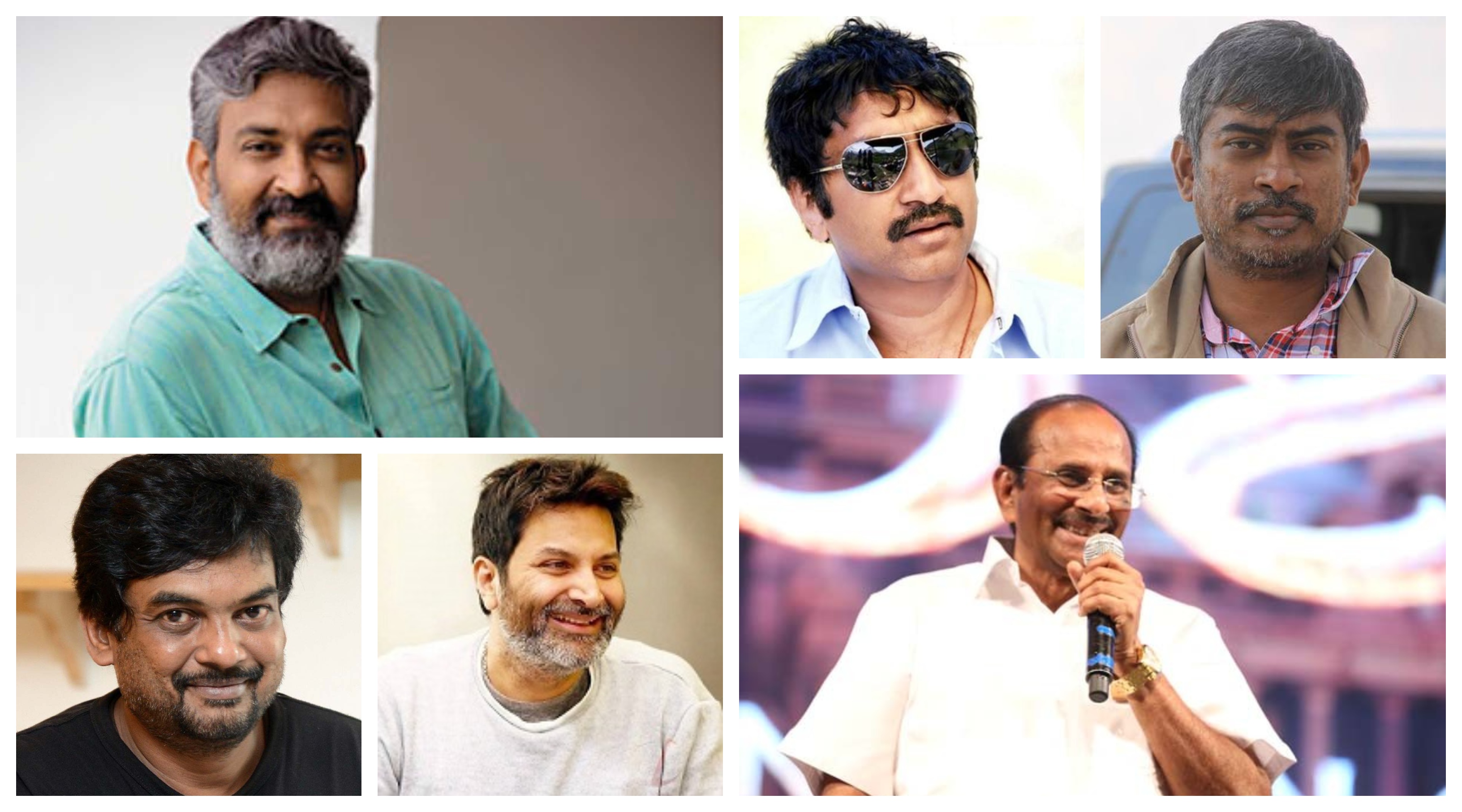 Every story starts with a writer whether it be a novel, article, or movie. When it comes to the Telugu Film industry everybody knows that we are the most commercial industry in India and make the best masala and commercial movies in India. But of late, the ideas seem to have dropped and there's no room for innovation.

Is it due to director writer burnout or the fact that all the good writers have gone to the shed? Let's find out in this analysis of directors and writers.

1) Directors- In this case definition is directors who only write the screenplay and direct their own movies but DO NOT WRITE THE STORY. Max number is 3 or 4 for them

SS Rajamouli: He doesn't need an introduction. The biggest star in Telugu cinema more than any hero and the top director of India, Rajamouli has never written a single story of his and has instead given that responsibility to his father. The result is solely focusing on direction and knowing when to elevate what point of the story when and 3 industry hits and 11 straight hit movies.

Sreenu Vaitla: Once the comedy king of TFI, Vaitla's success began when he hired the team of Gopimohan for story and Kona Venkat for dialogues and focused on his direction and scored blockbuster after blockbuster.

K Vijaya Bhaskar: The director made 4 classics in Nuvve Kavali, Nuvvu Naaku Nachav, Manmadhudu and Malliswari. But it was writer Trivikram Srinivas who take away all the credit and has since became an iconic figure in Telugu cinema. Those films success were as much Bhaskar's as they were Trivikram's.

2) The All Rounders - Story, Screenplay, Dialogues and Direction

Trivikram: Known for his witty dialogues and razor sharp writing, Trivikram has lasted the test of time due to movies like Nuvvu Naaku Nachav, Manmadhudu, Malliwasi, Nuvve Nuvve, Athadu, Jalsa and Khaleja. Since 2012, he has changed gears and become more successful but delivering movies of less quality with each passing year.

Boyapati: He's closer to the shed than doing anything big. Is known for making senseless mass entertainers and track record is hit or miss. Story writing skills are very outdated.

Koratala Siva: The writer for movies like Simha, Bhadra, and Brindavanam, Siva made the jump from writer to director with Mirchi in 2013 and has 1 industry hit to his name and 4 consecutive hits. One of the best writers in the industry, his movies are known for blending social problem with commercial elements.

Anil Ravipudi: A discount Sreenu Vaitla, Ravipudi wrote movies like Souryam and Aagadu before also making the jump to director and has 5 straight commercially successful movies to his name.

Sampath Nandi: Best known for Ram Charan's Racha, Sampath Nandi knows the mass pulse but for some reason seems to be struggling.

Parasuram: A protege of Puri Jagan, Parasuram is known for great dialogue writing and has a good grip on comedy. But he lacks solid story writing skills as all his movies have the most basic and routine plots.

VV Vinayak: He's basically gone to shed at this point. The most outdated director working today. The difference between Tagore and Khaidi 150 is very evident on screen. Lucifer remake with Chiru is his last hope.

Puri Jagan: Puri can make as many rods as he wants but truth is he's still the same guy who made Pokiri, Desamuduru, Idiot, Neninthe, Chirutha, and Businessman. However his story writing skills are either completely absurd or it works. His last successful movie with a star was Temper which HE DID NOT WRITE.

Bobby: Rod director. Power was decent but other than he's complete scrap. Worst writer as well.

Chandrashekar Yeleti: Most underrated director in TFI. Known for his different stories and screenplays. Excellent director and writer. Needs more recognition for sure.

Srinivas Avasarala: Another great writer and director. Oohalu Gusagusalade is one of the best rom coms in modern Telugu cinema. His direction and writing were on point in that movie.

Vivek Athreya: Made Mental Madhilo and Brochevaruevarura. Known for his new age stories and seems to be promising.

Veeru Potla: Gone to the shed. Known for movies like Bindaas and Temper, also has Doosukeltha to his name and then made Eedu Gold Ehe with Sunil and never returned. Claims writers are treated like trash.

Tharun Bhascker: Known for Pellichoopulu and Ee Nagaraniki Emaindi. Also known for his outspoken attitude which doesn't go well with most people. Such as calling out critics for trashing ENE or trashing Mahesh Babu movies and calling out commercial cinema. Pellichoopulu was good and fresh, but he has a lot to learn.

Shiva Nirvana: Seems to understand mature love stories the best. Known for Ninnu Kori and Majili. Has solid writing skills and is a good director as well.

KV Vijayendra Prasad: Arguably the most successful writer of our generation, Vijayendra Prasad has written the story for all of Rajamouli's movies and understands writing better than most people. He has provided the story upcoming RRR as well which is geared for a blockbuster.

Parachuri Brothers: The most successful story writers and screen writers ever in TFI, they have delivered countless hits. Most recently wrote Sye Raa.

Posani: The OG writer, every single star director and writer now started off as his apprentice which are not limited to Trivikram, Koratala Siva, and Boyapati Sreenu. He has not written a film in a long time and is also a director and has become a full time actor.

Kona Venkat: Best known for his bakra formula hatched by him, Gopimihan and Sreenu Vaitla, Kona Venkat seems to be stuck in a never ending time machine where the Gundamma formula still works. Most recently wrote Nishabdam and is among the worst movies ever made. He's lost his touch heavily.

Gopimohan: The other half of Kona Venkat, Gopimohan wrote the story for all Vaitla movies from Venky to Baadshah. And then came Mister. How he could even think of something so bad is beyond me. Gone to the shed.

Vakkantham Vamsi: Wrote the story for blockbusters such as Kick and Race Gurram and provided the story for Temper. Made the leap to director with Naa Peru Surya and proved every writer SHOULD NOT BECOME A DIRECTOR.

BVS Ravi: Dialogue writer for Munna, Parugu and Athidi. ALso made two movies in Wanted and Jawaan. Both are disasters.

Veligonda Srinivas: Wrote the story for Akhil and Winner. Gone to the shed. Worst writer.

Akula Shiva: Best known for movies like Lakshmi and Krishna with Raviteja, recently wrote Intelligent and went to the freaking shed and never came back. One of the most outdated writers at the moment. How could someone even think of something so unbelievably dumb? Worst.

Sreedhar Seepana: Rose to fame with Loukyam and then wrote Aatakundam Raa with Sushanth. How absurd is that movie. Read this review to find out. He should never get another offer again either. Outdated and childish.

Prasanna Kumar Bezwada: Known for his association with Trinadh Rao Nakkina and wrote movies such as Cinema Choopistha Mava, Nenu Local, and Hello Guru Prema Kosame. Stories are very routine but have engaging moments to make them work.

Conclusion: Does the Telugu Film Industry have a dearth of writers. The answer is yes and no.

The problem is that every writer enters the industry to become a director. And only a handful of them can make it big. And a bigger problem arises when you try to wear too many hats at once.

Trying to do the story, screenplay, dialogues and then direct a movie on top of it is a task in itself. In short, if directors can start encouraging and giving preference to more talented writers and lessen the burden on themselves, then I think we are bound to see new and fresh ideas in the industry.

It's just that too directors try to do too much and that usually results in a product that not executed well.

Here's hoping that the industry will spring some new writers and send all the outdated writers and directors to the shed in the coming years. The industry is right there for breaking the door and making different cinema and it's only a matter before we start making amazing movies with unique concepts.