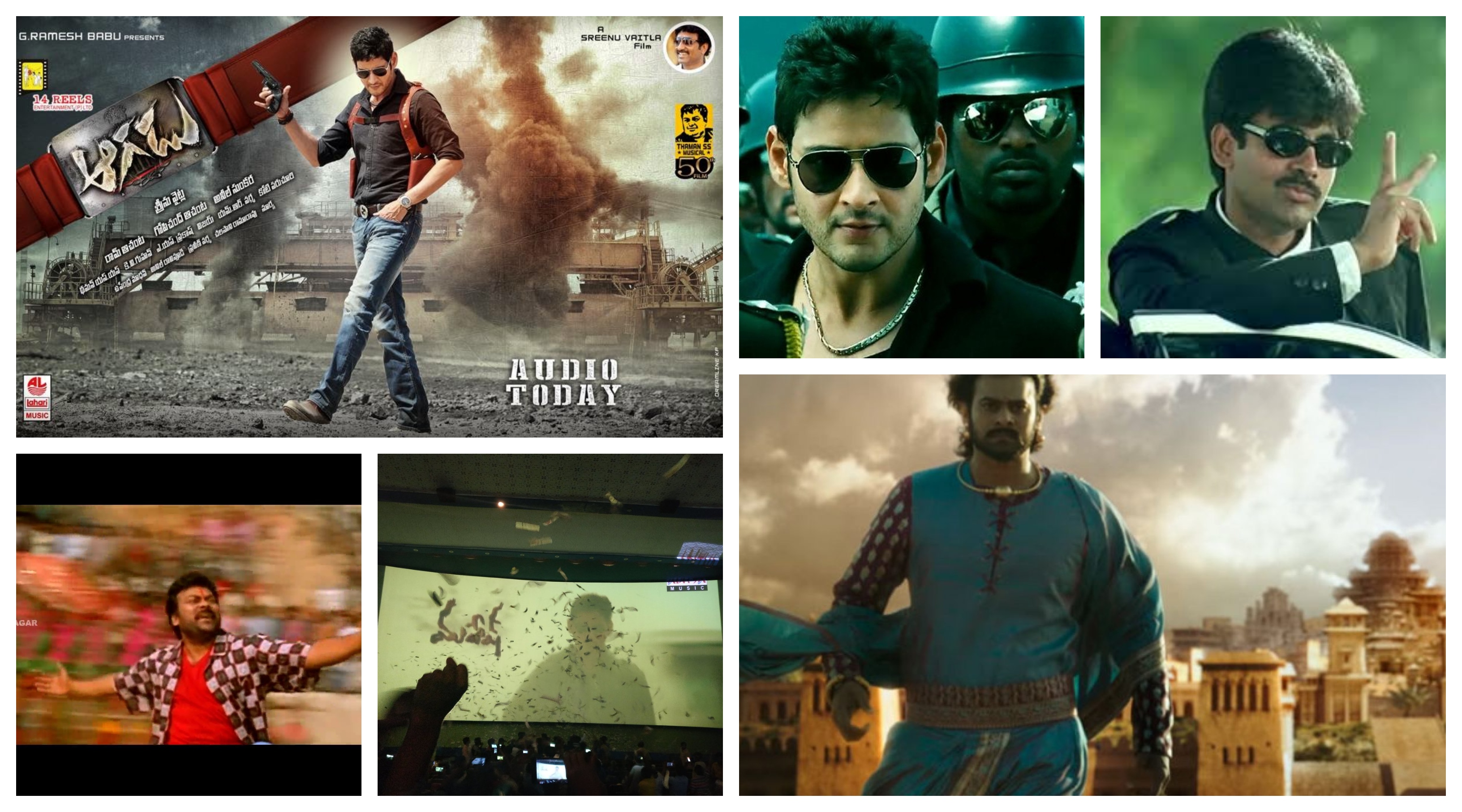 The commercial Telugu movie formula has been around for ages and doesn't seem to be dying. But there's something about the opening song of a movie revolving around the hero that always had hype and left you on a high.

The director's taking, cinematography, dance master, music director and actor's screen presence made these songs a true treat to watch. They are missing big time nowadays in Telugu film industry. Here's a list of the best intro songs of my lifetime in no particular order.

Aagadu (2014): Shankar Mahadevan and intro songs are a match made in heaven. The taking by KV Guhan and Sreenu Vaitla made Aagadu the greatest opening 20 mins of a movie in my opinion given the hype. The song is a sheer delight and arguably the greatest opening in Mahesh Babu's career.

Thakadimithom (2004): Allu Arjun's Aarya is a true classic and Allu Arjun's first true hero introduction scene is a feast to watch with his flawless dance moves.

Naluguriki (2002): Shankar Mahadevan and Mahesh Babu dancing all over the Grand Canyon and Arizona is a visual feast for the eyes. Mani Sharma's music only adds to the energy.

Nee Dookudu (2011): The opening song from classic Dookudu was Thaman's rise to the big league. An absolute banger of an opening number, Shankar Mahadevan once again propels this song to the next level with Mahesh Babu's incredible screen presence giving you goosebumps.

Hare Rama (2003): A musical masterpiece combining classical music into a funky beat, this song is like is being in heaven. Shankar Mahadevan and Mahesh Babu once again combine for an all time classic for this banger in Okkadu.

Okka Maata (2004): Shankar Mahadevan's vocals and meaningful lyrics give this opening number from Arjun an amazing feel. Mahesh Babu's screen presence once adds so much value to it.

Adharaku (2005): Viswa's singing and lyrics are incredible and KV Guhan's lens takes this song to heaven and back in this Mani Sharma masterpience from Athadu in what some consider the greatest opening song ever in Telugu cinema.

Jagadame (2006): Kunal Jangawala's singing and Shyam K Naidu combined for an absolute firecracker that will have lighting coursing through through your viens in the classic opening from Pokiri by Mani Sharma.

Go Go Adhigo (2006): Yes they did copy a Michael Jackson song, but Harris Jayaraj's music is the only thing people remember about this Mahesh Babu starrer. KK's vocal's and Mahesh's screen presence carry the song to the next level as usual.

Kodithe Kottali (2004): The classic opening number from Tagore, Shankar Mahadevan and Chrianjeevi are a match made in heaven. With Shankar's powerful vocals and Megastar's dancing grace, sky is the limit. Another Mani Sharma wonder.

Maro Maro (2004): The opening song from Bunny, Tippu and Allu Arjun's dance moves make it a joy to watch. Music by DSP

Made in Andhra Student (1999): The iconic and might I add influential number of Thammudu, this song is Pawan Kalyan at his peak. The suits, the dance moves, the swag, literally everything about it has made it a timeless classic. Music by the great Raman Gogula who made so many classics with PK.

I'm an Indian (2000): The opening song from Badri, Ramana Gogula and Pawan Kalyan combined are always magic together. Need I say anymore?

Inthe Inthe (2005): Another Mani Sharma classic, KK and PK combine once again for another masterpiece in Inthe Inthe in Balu ABCDEFG.

Ye Mara Jahan (2001): KK, Pawan Kalyan, Kushi. That's all you need. Real Telugu fans know the hype and craze for this song and any song in the album. Mani Sharma mass.

Le Le Le Le (2004): The opening number from Gudumba Shankar, PK's relentless energy and screen presence and KK's voice have made another classic in their combo.

You and I (2008): The classic opening number from Jalsa, this song, the movie and the songs have a different fanbase. DSP at his peak.

Dekho Dekho Gabbar Singh: Baba Seghal hit it out of the park for the riveting opening number from blcokbuster Gabbar Singh. PK's mannerisms and energy make it a delight to watch over and over again.

Kadhulu Kadhulu (2007): The opening number from Munna, Harris Jayaraj delivered a blood rushing song powered by KK and Prabhas on screen. A rocking intro to a stylish movie.

Lucky Lucky (2001): The energetic opening number from Daddy, Shankar Mahadevan and Chiru combine once again with a beat that sure to get you and dancing in no time.

Bham Bham Bhole (2002): Chiranjeevi, Varanasi, his dance moves and Mani Sharma's music. Hariharan and Shankar Mahadevan combine to give one of the best opening songs ever for Megastar in Industry hit Indra.

Mamatalla Talli (2015): yeah I know what you're saying. Idi introduction number aah? You may not like the movie, but you can't deny you got goosenumps when Amarendra Baahubali finally made his entry with Prabhas's regal screen presence fit for a king.

Yamaho Yama (2007): The greatest opening number for a debutante, this song is all the evidence you needed to know Ram Charan was going to be the next Megastar. An absolute home run from Tippu, Mani Sharma brought out the best for this one along with Charan's FLAWLESS Dance moves.

Sattey (2007): The opening number from Desamuduru, the fun lyrics and Allu Arjun's incredible dance moves make this song a true delight from Chakri and Puri Jagan and co.

123 Nenoka Kantri (2008): This banger of a song sung by NTR and Karunya makes for a thumping opening to Kantri. Music by Mani Sharma and the taking is excellent.

Sairo Sairo (2013): The opening number from Baadhsah, NTR dancing around in Italy while random people watch in awe? Sign me up anyday. A highly energetic and catchy song by Thaman S and captured brillaintly by KV Guhan.

Pranaamam (2016): Shankar Mahadevan and NTR combine once again for the irresistibly catchy Pranaanam from Janathag Garade. NTR and Mumbai are gloriously captured by Thiru's lens.

Barse Barse (2006): DSP, NTR and Holi made this an insanely catchy number from Rakhi. NTR's energy and dancing took care of the rest.

Mr. Perfect (2009): The insanely brilliant opening number from Aarya 2, Allu Arjun and Baba Sehgal's vocals have made this song last the test along with DSP's incredible composition.

Laila O Laila (2013): SOme 6 singers combined for the intro song from Naayak. Charan dancing is like music to the ears and flows like liquid. Very smooth.

Racha (2012): Charan, Mani Sharma, and an opening song. Dance moves galore in this one as Charan knocked this one out of the park.

Run (2015): A brilliant composition that literally compliments Charan;s dance moves, Charan once again obliterates the dance floor with his steps. Music by Thaman.

Dhruva Dhruva (2016): Charan in a six pack avatar for the first time, PS Vinod's visual and Hip Hop Tamizha's composition have made this a Telugu workout song classic.

Ranga Rangasthalana (2018): The opening number from Rangasthalam, Ram Charan once again kills it in a lungi and glorious visuals of West Godavari under Rathnavale's masterful lens.

Ee Jenda (2002): Mahesh Babu and Shankar Mahadevan combine once again for the patriotic and inspirational opening number from Bobby.

Khabaddarani (2007): Mahesh Babu, a yellow haze, a black suit, shotgun, and Mani Sharma's music. The intro song from Athidhi is truly underrated and absolute classic on screen and audio wise.

Aamchi Mumbai (2012): The insanely energetic intro song from Businessman, this was probably Mahesh Babu at this peak. With a scintillating composition by Thaman, this song will literally have your blood coursing through your veins at 2x speed.

Parare Parare (2006): Chiranjeevi and Shankar Mahadevan have never failed and the intro song from Stalin isn't their best, but it's still peak Chiranjeevi with his dance moves and screen presence. Music by Mani Sharma.

Good Morning (2007): Chiru and Shankar Mahadevan combine once again for the energetic opening number from Shankar Dada Zindabad. Perhaps this and Aakalesthey were the only good things to come from the movie.

Sydney Nagaram (2010): Wouldn't be a list without this classic. The opening song from Orange, Charan and Karunya's voice take on a glorious tour of Australia from a masterpiece album from Harris Jayaraj.

Boochade Boochade (2014): The opening song from Race Gurram., this song is pure goosebumps as soon as the beat drops. Everybody's vocals along with the visuals and Allu Arjun make it a true classic.

Get Ready (2008): the opening number from Sreenu Vaitla's Ready, Ram's smooth dance moves and Karthik's dance moves are sure to bring your nostalgia back with this energetic song by DSP.

Ek Niranjan (2009): Def an underrated movie and another masterful song by Mani Sharma, if you haven't seen the movie you definitely know this song. Prabhas's screen presence and energy can never go wrong in this song by Ranjith.

Any Rajini and SP Balasubramanyam song. Rest in Peace to the legend, We miss you and your energetic voice and songs sir.