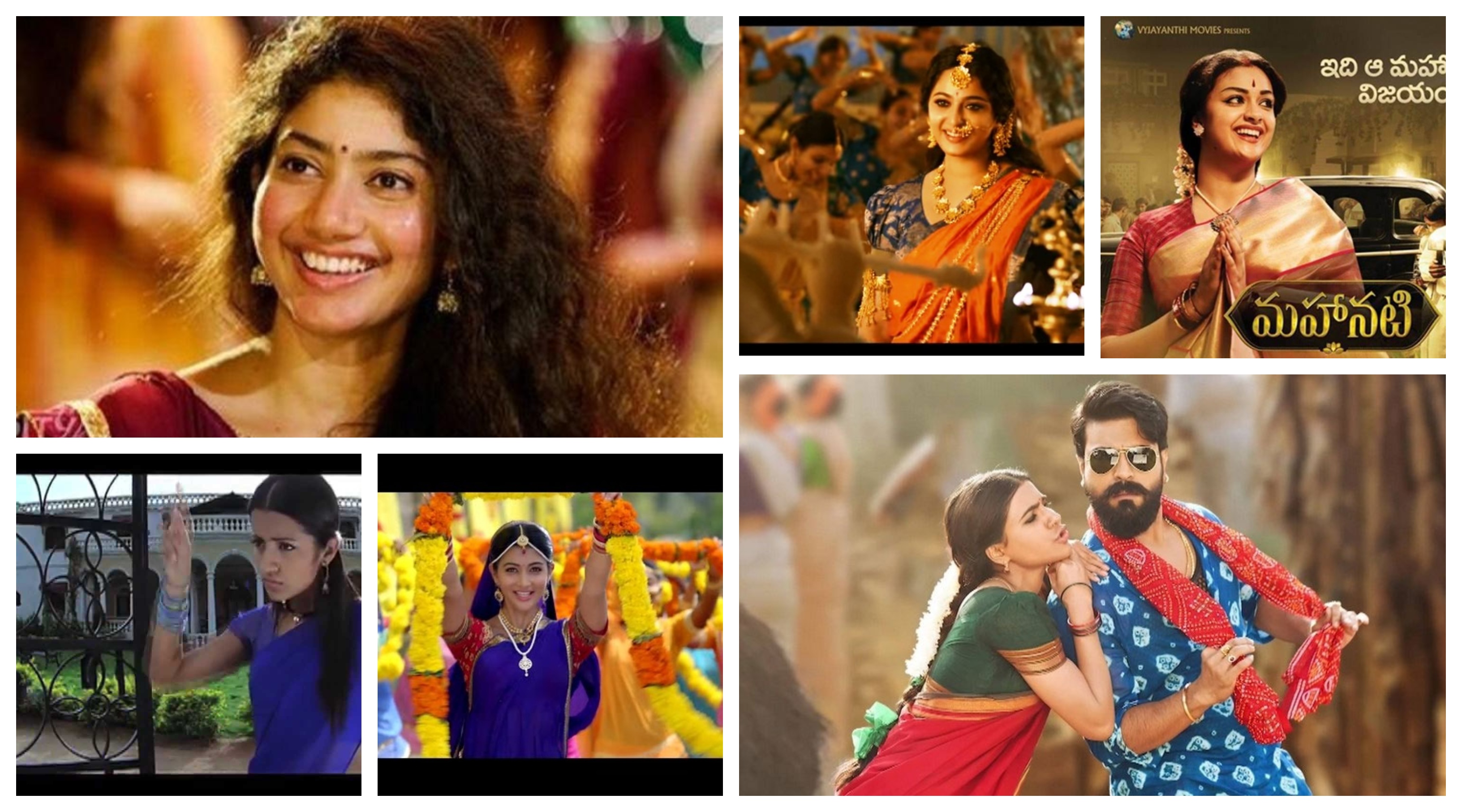 In an industry that is so self obsessed with masculinity especially commercial Telugu movies, the heroine or the women in the movie usually take a backseat. But little do we forget that they play an important part in the movies success overall and are capable of performances as good or better than men and female singers whose songs last the test of time as long or even longer than some men.

Here's a list of the best heroine oriented songs that gave given us some classics in Telugu film industry since 2000.

Vachinde (2017): A classic song for literally every Indian girl. It's a fact that there's no Fidaa without Sai Pallavi, and no Vachinde without Sai Pallavi and she absolutely electrifies the dance floor with her moves in this iconic song.

Sye Raa (2019): You have seen hero intro song that give elevations, but have you ever seen an elevation song with two women give UNLIMITED GOOSEBUMPS? Sunidhi Chauhan and Shreya Ghoshal take this song to the next level with their singing and a thumping beat that reverberates throughout your body. With a stunning on screen performance mainly from Tamannah, Amit Trivedi and R Rathanavelu made this song a classic for a long long time.

Mahanati Title Song (2018): Savitri Garu was the GOAT (Greatest of all Time). And it's only fitting that her biopic was also the GOAT biopic in South Indian cinema as a whole. Powered by the ever talented Anurag Kulkarni's vocals, Mahanati is a goosebumps filled song that speaks of the greatness of the stalwart actress that was Savitri Ganesan.

Sada Nannu (2018): Another instant classic from Mahanati, Sirivennela Sita Rama Sastry proves there's no better lyrics writer in present Telugu cinema when it comes to pure Telugu. Sung by an incredible Charulatha Mani in a beautiful rendition, Sada Nannu is sure to put you in the love feels.

Nuvvu Yemayo Chesavo Gaani (2003): Bhumika Chawla's character in Okkadu with Superstar Mahesh Babu was essential to the films story. In a movie that catapulted both Mahesh and Bhumika to greater heights, Nuvvuyemayo remains one of the most classic female introduction songs ever in modern Telugu cinema. Sung by the legendary Shreya Ghoshal and music by Mani Sharma.

Sogasuchuda (2006): Another classic by Harris Jayaraj in Sainikudu, Trisha's intro song is once again sung by Shreya Ghoshal and one the most soothing compositions and melodies.

Pillagaali (2005): Another Trisha firecracker from the all time classic Athadu by Trivikram Srinivas. The playful nature, peppy composition, amazing singing by Shreya Ghoshal and most of all Trisha's presence make this one of the best female intro songs ever in Telugu cinema.

Gopikamma (2014): Starring Pooja Hegde as the heroine, this all time classic from sung by KS Chitra from Mukunda showcases Telugu culture at it's best. Goosebumps song guaranteed and arguably the best song in Pooja's career.

Rangaamma Mangamma (2018): A song with more views than one could imagine, MM Manasi rocks this song from industry hit and Sukumar masterpiece Rangasthalam.

Kanna Nidurincha (2017): This song from All time industry hit Baahubali 2 is a soothing melody where Princess Devasena tries to put her prince to sleep in a visually stunning and amazingly choreographed song. Music by the Legend MM Keeravani.

Varsham Munduga (2011): This song from Sega features Nani and Nithya Menon in a forest and is beautifully sung by Sunith and Suzanne. A soothing melody.

Jejeamma (2009): Anushka's turn as the royal queen in Arundhati was her big breakthrough in TFI and also served as the big break for singer Kailash Kher as well in this song that talks about Jejeamma's valor.

Okkadante Okkade (2010): Filmed at the Petra in Jordan, Anuksha courts Nag in a desert wonderland captured beautifully by Sarvesh Murari and sung by Ramya NSK. Music by Thaman S

Oye Meghamla (2016): This soothing melody from Majnu features Anu Emmanuel gushing over Nani in a beautiful village. Sung by Chinmayi Sripada, it's composed by Gopi Sundar.

Mandaara Mandaara (2018): Shreya Ghoshal is a legend and there's no doubting that and this melody from Bhagamathie won her best singer in 2018. Composed by Thaman S.

Naa Kosam Nuvvu (2009): Sung by Geetha Madhuri and Deepu, this song from industry hit Magadheera is irresistibly catchy and fun to watch. Composed by MM Keeravani.

Aww Tuza Morg Kotha (2014): This song from Mahesh Babu's 1 Nenokkadine featured Kriti Sanon. She and a host of others literally salivate over Mahesh Babu in a beach in Goa. For what it's worth, song is an earworm and insanely catchy.

Nuvvostanante Nenoddantana (2004): Contrary to the 2005 film that was made later, this song is actually from Prabhas starrer Varsham and serves as Trisha's opening song. Dancing in the rain in a railway station, it's sung by the evergreen KS Chitra and is a visual feast.

Chali Chali Gaa Allindi (2011): This classic from Prabhas's Mr. Perfect is sung once again by Shreya Ghoshal and is a visual feast throughout. Music by DSP.

Vache Vache Vaana (2008): This underrated gem is sung by Shreya Ghoshal and features Nayantara singing in the rain from Kathanayukudu starring Jagapathi Babu and Rajnikanth. Music by GV Prakash Kumar.

Aaradugula Vuntada (2013): This chirpy song from SVSC serves as Samantha's introduction as she and her sisters sing about their dream boy who must be 6 feet or more and possess the qualities in the lyrics. Music by Mickey J Meyer

Naidorintikada (2016): This 2.5 min song from worst movie ever Brahmotsavam is perhaps one of the only thongs to come from it. The lyrics are fun and song is catchy.

Choosa Choosa (2016): Rakul Preet Singh is clearly obsessed with Ram Charan in her intro song from Dhruva with the beautiful locales of Kashmir effectively captured by PS Vinod.

Neeve Neeve (2018): This song is sung by..... wait for it.... Shreya Ghoshal again and captures the pain of a young woman from Vijay Deverakonda's Taxiwaala

Yegirithe Pothe Yentha Baguntadi (2010): From the evergreen classic Vedam featuring Allu Arjun and Manchu Manoj, Anushka made headlines when she accepted the role of a prostitute in this groundbreaking drama. It's safe to say the movie and this song became iconic in the end.

Seethamma Vakitlo Sirimalle Chettu (2013): The title song from the Mahesh Babu and Venkatesh starrer is an instant classic that transports you into a different world once you hear it. Sung by KS Chitra, song is composed by Mickey J Meyer.

Em Sandeham Ledu (2014): Oohalu Gusagusalade is one of the breeziest movies made in recent times and so were the songs by Kalyani Malik. Features Naga Shourya and Raashi Khanna.

Idi Kalala Vunnade (2018): Kiara Advani finally gets a chance to break character and sing and dance cause her new boyfriend is the new CM of Andhra in Bharat played by Mahesh Babu. This song from Bharat Ane Nenu is sung by actress and singer Andrea Jeremiah.

Kanulu Teliyani (2017): This irresistibly catchy song from Sreenu Vaitla rod Mister is perhaps the only good thing to come of it. Lavanya Tripathi's presence coupled with the visuals of Chikmagalur makes for a visual delight.

Rang De (2016): Another classic from Trivikram's A Aa, Samantha finally realizes her love and wants to be with her lover played by Nithin. Sung by Ramya Behara, Rahul Nambiar, Sai Shivani, it's instantly catchy and visually pleasing with lots of colors hence the title.

Mellaga Mellaga (2018): This soothing melody from Chi La Sow is sung by director Rahul Ravindran's wife Chinmayi and was easily one of the best songs of 2018.

Nalona (2019): Once again sung by Chinmayi, this song from Manmadhudu 2 was pleasing to the ears.

Priyathama Priyathama (2019): This song from Majili showcases a wife's love towards her husband or rather her falling for him. Chinmayi once again with music by Gopi Sundar.

Nee Tolisariga (2002): A classic from Santosham, Usha beatifully sings this song which has Shreya in her feels.

Mogini Jai Ganta (2010: An underrated gem by Mani Sharma, this song from Baanam is sung by Shreya Ghoshal and is soothing to the ears.

Kshaminchu (2006): This song from Devadasu featuring Ram and Ileana is captured on the latter and masterfully composed by Chakri and sung by Kousalya.

Edo Oka Raagam (1999): This all time classic is sung once again by KS Chitra from Venkatesh and Soundarya's Raja. Composed by SA Rajkumar.